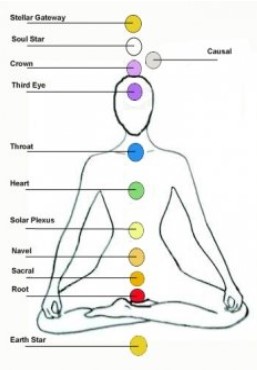 The most common system for most people who are familiar with the chakras is of course the 7 chakra system. However, it is not the only perspective out there.

The author Diane Cooper has been talking about the twelve chakra system, which is also connected with our 12 Strand DNA configuration which is being re-integrated into humankinds at the moment.

So, as we know the 7 chakra system consists of:

As we make that journey into developing that part of our being which is less known, or into the spiritual/energetic part of ourselves, then it seems natural that we should be developing outside of the current parameters of our physical body and thus more into spirit. So, we could consider the additional chakras to be chakras of spirit too….as they are not obviously aligned to the physical ….so far as we know.

N.B. two of the chakras around the head area (causal and soul star) may have actually been embodied within a different shape of the human skull in ancient times. There have been human skulls found in both Peru and Egypt (and they are located in museums now) that were developed in such a way that these extra two chakras could have been located within the skull itself. Katrina Raphaell suggests in “The Crystalline Transmission” that these skulls found were remnants of the ancient civilizations of Atlantis and Lemuria.

The additional chakras are the:

These are still discoveries in progress of course, but let’s look briefly at each one of these:

A lot of the clues are in the name – a gateway into Universal consciousness and Oneness. Impossible to define Oneness in this context, but I would think of it as something experiential rather than theoretical – a transcendental Divine experience and somewhat impersonal. It is said to be challenging to maintain this chakra in an open state. Said to resonate with the crystal Calcite.

This works in tandem with the Earth Star chakra and acts as a sort of filter for the energy received in the Stellar Gateway to be “brought down” into the physicality. The balance with the Earth Star is needed to ground (at a deeper level) the Divine experience.

This chakra needs ongoing cleansing and one thing that needs to be cleared is astral pollution that is picked up in the dream state. A lot of this can be avoided by setting a clear intention before going to sleep to avoid the lower astral planes.  Good grounding is also vital.

That balancing with the Earth Star chakra is going to be become increasingly and incredibly prevalent over the next few months and years in ways that we don’t yet understood. This is said to resonate with the crystal Selenite.

Working with this chakra is said to be very helpful to still the mind. Meditation and other self-mastery techniques are very useful in this respect as well as the Harmony symbol for Reiki II (and above) people. Once this chakra starts to do its work (and bear in mind the human being has to do its work too) then we can allow more Soul energy from the Soul Star into the human experience.

This chakra resonates with the crystal Kyanite and I would recommend a piece of that under your pillow at night.

I have a different sense of this chakra to most of those that have already been published and believe chakra centre that opens us to the heart of humanity i.e. a sort of global consciousness that enables us to remember many things that are not stored in our personal consciousness such as the people that we need to meet in our lives.

It’s also a place to embody the non-judgement that we suspect or know that exists at a Soul level, and additionally there’s almost like a Soul Group consciousness that sits with this chakra.

It resonates with the colour turquoise (green of the heart and blue of the throat) and crystals of a turquoise colour. It is, in my opinion, incredibly related to the healing of Earth and has a way of connecting with the Earth Star chakra that somehow relates to the electro-magnetic energy field of the collective human consciousness and the electro-magnetic energy field of the Planet.

I’ll go a little bit out on a limb and say there is an extra-ordinary connection with certain aspects of both the Pleiadian and Atlantean consciousness that somehow relates to this chakra. Those that intuitively resonate with colour turquoise will instinctively know what I mean, but like me, maybe not be able to express it in entirely logical sentences….yet.

This chakra works in harmony with the Soul Star (though all chakras work in a harmonic fashion of course) and also for the connection to the Higher Heart and the electromagnetic energy fields of human consciousness and the planet.

This also works to improve a person’s grounding. Once we start to actively “retrieve” the energies of the Soul through our healing/regression work (or already have them in place) then it becomes essential to ground with this chakra.

One method is to ground as per normal i.e. roots / base chakra into the heart of Mother Earth with a two connection between person/planet. Then additionally ground down via the Earth Star chakra into the planet. As this chakra works in tandem with the Soul Star, my toughts are that this will serve to help us anchor more of our Soul energy, or make it easier to process through the human experience or both.

Resonates with crystal Hematite, however I would also add use it in tandem with black tourmaline and I would also think about both Nuumite and Spectacularite and see if they resonate for you. The latter both have interesting vibrations in that you either get them or you don’t and my own sense is that you resonate with one or the other.